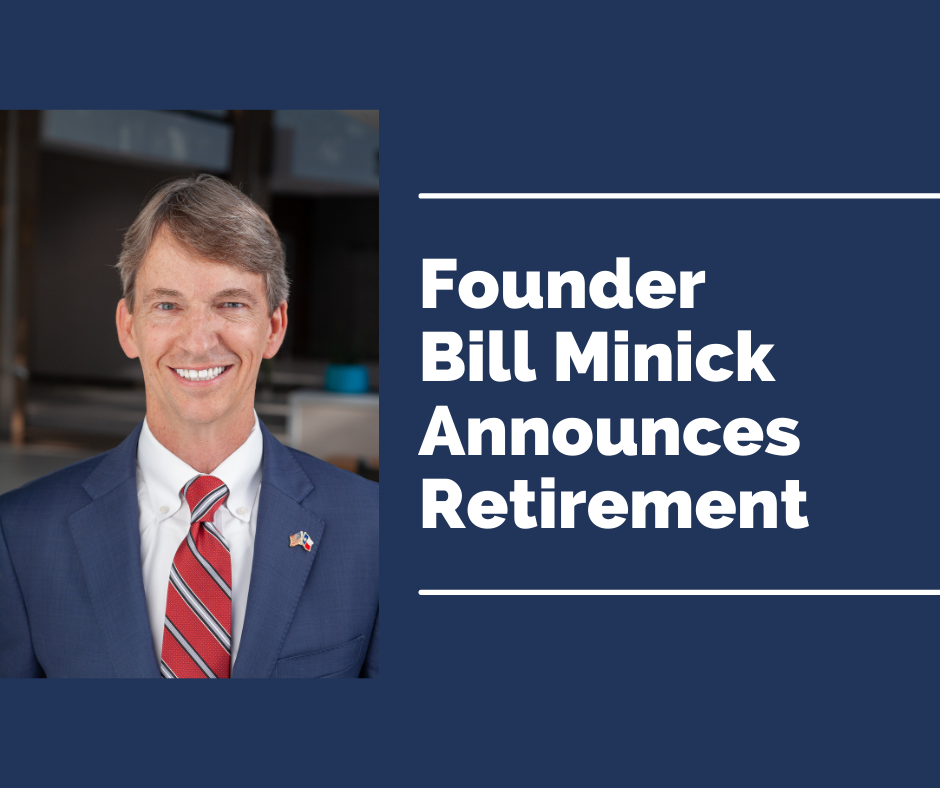 Bill Minick, founder of PartnerSource, has announced his retirement as chairman at the end of March. Jennifer Hurless, president of PartnerSource, will continue in her current role leading this company that has proven better business comes from taking good care of injured employees.

Jennifer says, “One major result of Bill’s efforts is a profound shift in how to deliver prompt, outstanding medical care and better benefits to injured employees, and work through any concerns they may have. We are honored to continue his legacy as PartnerSource moves toward its fourth decade in business with a strong position in the industry.”

Bill Minick began his professional career as a corporate and tax attorney for nine years with major law firms, developed many of the first alternative dispute resolution programs for employment-related claims, and led the Dallas property and casualty insurance operation for a global insurance broker. But Bill is best known for pioneering Texas injury benefit plans and growing PartnerSource into the leading consulting firm for competitive alternatives to traditional workers’ compensation.

Bill has a track record of individual and team successes, advising dozens of Fortune 500 companies in retail, food service, healthcare and transportation on their workers’ compensation programs. He has fostered industry partnerships to deliver best-in-class benefits and liability insurance coverage, better medical outcomes for over one million injured workers, and billions of dollars in economic development.

Advocating for the Industry

“I am grateful for all the client and industry relationships developed over the years,” Bill said. “And I’m most grateful for having worked with an incredibly talented PartnerSource team of attorneys and claim, information service and administrative professionals. They will continue to innovate and deliver outstanding service under the highly capable leadership of PartnerSource President Jennifer Hurless.”

Although retiring from PartnerSource, Bill is active in many charitable and civic causes, including service as secretary of Kids’ Chance of Texas, a judge of the Comp Laude Awards, a trustee of Abilene Christian University, and a board member of the Men’s Advocacy Group of New Friends New Life. He will also remain active in writing, speaking, and serving within the injury benefit and workers’ compensation industries through collaborations that advance better outcomes for injured workers and employers. Bill can be reached via his personal email at bill@minickinc.com.